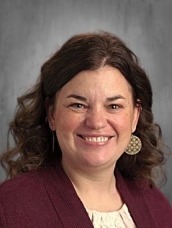 Amy Balsbaugh came to John R. Bonfield Elementary School as Principal in December of 2018.  Prior to this time, she served as the Principal of East High Street Elementary School in the Elizabethtown Area School District for four and a half years where she helped to build a positive school culture for student learning.  She began her career in the Warwick School District as an elementary music teacher where she served in a variety of leadership roles at the building and district levels.

Balsbaugh’s educational background includes a bachelor of science degree from Penn State University where she was a Schreyer Honors Scholar, and a master of music education degree from West Chester University with a focus on the Orff-Schulwerk approach which incorporates literature and language into the teaching of music.  She received her principal certification from Penn State University.  Mrs. Balsbaugh has also completed reading specialist coursework through Eastern Mennonite University.

Balsbaugh is a member of both the National and Pennsylvania Associations for Supervision and Curriculum Development, the National and Pennsylvania Associations of Elementary School Principals and the National Association of Elementary and Secondary School Principals.
Mrs. Balsbaugh lives in Lititz with her husband, an elementary gifted teacher, their toddler daughter and infant son, as well as their two dogs.  She is thrilled to be back home at Warwick.  She is looking forward to continuing to build a positive school culture where families, students, and teachers work together to provide all students with the best learning opportunities possible.

You can follow Mrs. Balsbaugh on Twitter by following @Bonfieldbees to stay up to date on school events, information, and announcements.  You can sign up for Mrs. Balsbaugh's school-wide Remind text message or email notification system by texting @3HDFEK to 81010 to sign up to receive school-wide announcements via text message or visit rmd.at/3hdfek.   Try it out.  You can unsubscribe at any time.