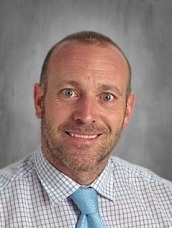 Mr. Weidman graduated from Ephrata High School in 1999 and then went on to receive a Bachelor's Degree in Elementary Education from Shippensburg University in 2003. After college, Mr. Weidman came to Warwick School District where he spent a year and a half substituting.  The majority of his substituting was long term.  Mr. Weidman completed two long term jobs in kindergarten and one in first grade.   After that, he was hired to a contracted position.  During his first years at Warwick, Mr. Weidman received a Master's Degree in Elementary Educational Strategies from Wilkes University.  On a personal note, Mr. Weidman lives with his wife and two children in Lititz, PA.  Both of his children attend Warwick School District!  Mr. Weidman enjoys spending free time with his family and cheering on his favorite teams, the PHILADELPHIA EAGLES and NEW YORK YANKEES!