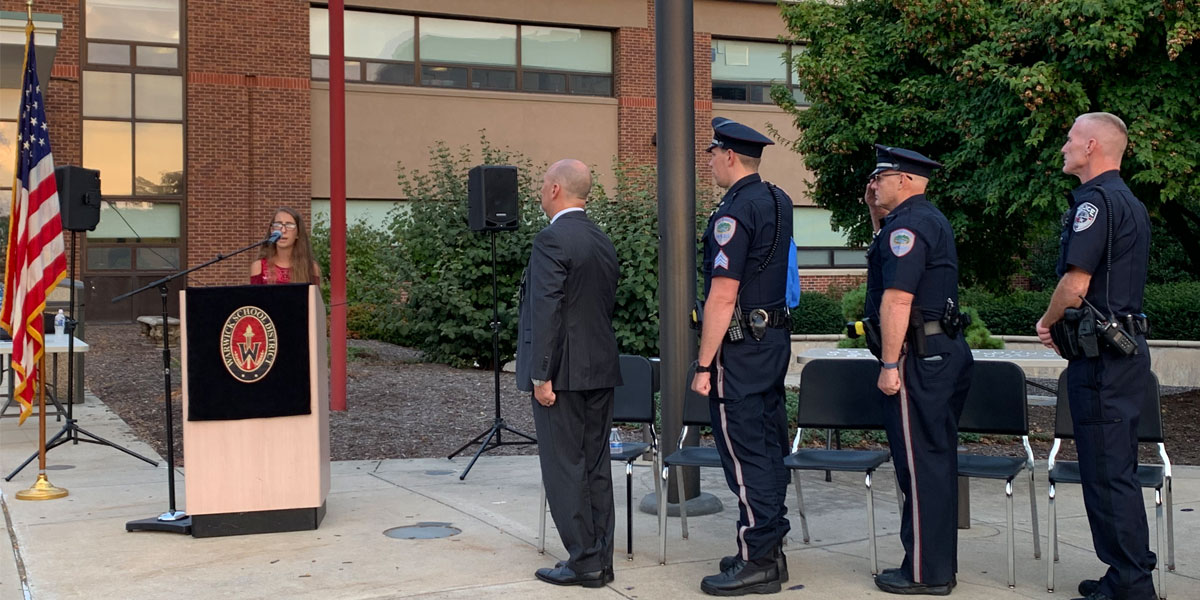 On Wednesday morning the Warwick High School Civics Club presented their 7th annual 9/11 Remembrance Ceremony at the flagpole at the main entrance to the high school. Each year on September 11th, the Civics Club invites local first responders and hometown heroes to be recognized and honored for their service.

"We started doing the event on September 11th, 2013.  The goal of the event and the Civics Club is to connect classroom Social Studies with the world around us and our own local community," stated Paul Castellitto, social studies teacher and advisor for the Civics Club.

The 9/11 Remembrance Ceremony is a time to remember those who lost their lives on 9/11/01 and to honor those Hometown Heroes in the greater Lititz community who serve on a daily basis and sacrifice their lives.  It is the goal of the Civics Club to raise awareness of the roles and importance of the local first responders in the community.

"Hopefully this awareness will compel our Warwick students to want and serve as firefighters, law enforcement, EMTs, etc. The Civics Club gives students a vehicle to connect and to get more involved outside of the classroom," said Mr. Castellitto.

The September 11th ceremony started with the National Anthem performed by WHS freshman, Angela Cordischi, followed by remarks from Mr. Castellitto. Sergeant Jared Hahn, Lititz Borough Police; Officer Ken Wolfe, Lititz Borough Police/SRO for Warwick; Officer Scott Martin of Ephrata Police; Lynn Mearig, Chief of the Brunnerville Fire Company; and Amanda Martin, Brunnerville Fire Company were honored and recognized for their service.  Judge Jeffrey Conrad concluded the ceremony with a speech on the importance of remembering this day, reminding all that freedom is not free, and it comes with a cost.

Mr. Paul Castellitto closed stating that September 11th is a day where we remember the brave men and women who sacrificed their lives in the line of duty.  The event concluded with a moment of silence in remembrance of that day.

Warwick students, staff and families were also in attendance.